Leanne Moden is a poet, performer, writer, workshop leader, compère and event organiser, currently living in Nottingham, and we asked her to judge our Poetry Competition. Thankfully, she said yes and also agreed to a little interview with Nick (our Chair) about her background, her tastes in poetry and her thoughts on the competition and winners.

Tell us a bit about yourself: where you grew up, your background & how you came into the world of poetry

I’m from west Norfolk, the wilds of the Fens; that bit of the county that sits between Lincolnshire and Cambridgeshire.  I’ve been writing since I was a teenager, which would have been the early 2000s, and started performing and getting up on stage about 2010. Since then many cool things have happened such as performing in Spain and Estonia as well as at national slam championships. I’m really grateful to have been able to have ‘a voice’ and then to have the opportunity to get out there and use it.

Why poetry? Why not songs, or prose?

Well, I can’t sing so music’s out of the question! I like the immediacy of poetry, the way you can convey a story, a thought, a mood, in a concise and precise manner. Also, I’m easily distracted so poetry as short form creativity is good. I’ve tried doing short stories but I always end up with poetry no matter how I start. And I’m in awe of novelists; I just don’t have that ability to focus for the required amount of time!

You recently wrote a fantastic poem on your love of John Virgo, the silver fox of the snooker world. What do you usually like to cover, or appreciate in poetry? 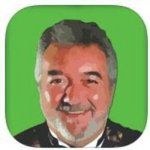 Haha! This was strange one. It came into being as a challenge by another poet, to write about a sport you know nothing about (which is easy, because I know nothing about any sport). I remember watching Big Break on telly with my dad and I developed a kind of schoolgirl crush on John Virgo. I wasn’t sure whether to post it on YouTube but it’s had a really good reaction. I’m not certain how it would go down live due to the likely age of the audience – they’re probably too young to know John Virgo. The key thing when performing live poetry is that you want the audience to engage with you. I suppose that’s a dichotomy between page and performance. Anyway, I sent it to JV on Twitter but I’ve not heard back yet!

As for my poetry preferences, one of the things I really like, which we’ll cover later, is when a poem takes something familiar and makes you see it with fresh eyes. I love a fresh perspective on everyday things. In my own work I think about the absurdity of life: “isn’t this odd?” sort of thing. I suppose I’m a kind of observational comedian, but more of a poet and less funny! Being able to see something with fresh eyes is valuable in a poet.

I first met you at your Crosswords Spoken Word open mic evenings in the caves beneath the Malt Cross pub in Nottingham. How did that come about? 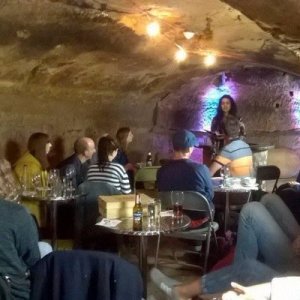 So, I’m really interested in poetry as a means of creative expression; it’s not just something for published poets, an ivory tower. I want to be able to open it up to as broad an audience as possible. I originally started running an open mic night with a friend in Norfolk in 2013 and it was really great to build up a community of people who had a shared experience and a love of voice. I moved to Nottingham and wanted something similar. I originally wanted to take it easy, settle in, bed down and so on, but I’m very excitable – I went on this historical tour of the Malt Cross and we got down to the caves where they were doing gin tastings and the guide said “if any of you think of any events you fancy doing in here, let us know”.  I’d only been in Nottingham two months, so obviously I said, “Yes! I know exactly what I want to put on!”  They were very receptive but of course then I had to follow it through. We’ve been really lucky and now have another great audience with a crowd of regulars that come every month. The performance aspect gives an immediacy to poetry and I’d advocate to all poets the benefits of reading your work aloud. After all this is how poetry was originally meant to be experienced.

What’s your experience of poetry competitions? Did you know that we’ve had entries from all over the UK and at least one from the USA?

It’s really nice to get an idea that this competition is bordering on a world-wide phenomenon!  I’ve partaken in competitions, not necessarily with a huge amount of success in terms of writing them down and sending them off, but I do a lot of slam work. I’ve won a few of those and been placed in national finals. It seems so counterintuitive to judge poems against each other. I always say it’s not about the best poem it’s about the judge’s favourite. Some people will get discouraged if they keep submitting and don’t get anywhere, but it’s very subjective. Success in written competitions is just one part of the wider landscape of what it is to be a poet.

For four years I was a judge in the Fenland Poet Laureate competition, being fortunate enough to win it in 2013. It’s really interesting to dig into a specific area of country – very flat, rural, economically deprived, not necessarily where you’d go to celebrate poetry – but every year we saw poetry of such high quality and in high numbers. It was the same theme every year – “the Fens” – and people always interpreted it differently. Poetry is so personal and tied to individual interpretation. A poem is a great opportunity, in one page, to climb into someone else’s mind & wander about.

What did you think of subject of ‘Flight’? We kept with a theme that was pretty open-ended.

I’m really glad you kept it open because there’s more space to be creative and more scope to play. It’s a very evocative term and brings to mind all kinds of subjects & themes – freedom, escape, travel, running – all to explore and unpick. Both the idea of the man-made and the natural world – and the subsequent juxtapositions – threw up interesting questions about humanity and our place in the world. I was really impressed by the incredibly high standard of entries for this competition. Thank you to everyone who submitted a poem to the competition, I really enjoyed reading them all.  I’ve obviously only got the poems and have no idea who wrote what, so I can’t wait to find out who won too!

You’ve picked three winners but did you identify any Commended pieces?

Yes – I got it down to a top 20 shortlist! It took three or four more reads to get down to the best of the best. In the end I selected three highly commended entries:

Migration (by A F Paterson of Poole, Dorset).  This is obviously about the migration of people. I really enjoyed the quiet, contemplative quality of this poem, which manages to pack so much emotion into such a short piece. It perfectly captures the grief, trepidation and relief that must be felt by anyone who has had to leave their homeland and settle in a new country. I also really liked the repetition of blues, greens and greys, which reflect both the sea and the sky and work to emphasise the distance travelled by the narrator in the poem.  Very, very visceral.

Intrepidus (by Sheila Garwood of Diss, Norfolk).  I’m an absolute sucker for rhymes – it’s always really great to see someone using a formal rhyme scheme – so I was particularly happy to read this excellent pantoum as part of the competition. The rhyme and rhythm are both spot-on, and the repetition of the form really enhances the meaning of the poem, focusing on flight as a metaphor for meeting challenges and overcoming adversity. It’s a really uplifting piece of writing.

Nature’s Undertakers (by Norman Bissett of Edinburgh).  By examining the oriental white-backed vultures through the metaphor of undertakers, the poet explores the cycle of life and death and comments on the folly of seeking to disrupt that cycle (as humans so often do). The description in this poem is lush without being overwrought and the poem ends on a question that invites the reader to further examine the balance of the natural world in a way that I found really compelling.

And now for the placed poems. What came Third?

The Heron (by Peter Cash of Trentham, Stoke-on-Trent)

This is about something that could have come across as something run-of-the-mill but the description and imagery were absolutely spot on. The poem really brings to life this heron and I felt as though I was there on the tow-path with the poet, watching the bird take off from the water’s edge. I also really liked the way the poem steps through emotions starting a little tongue-in-cheek in its observations before moving through awe, admiration and melancholy. There was a really strong, original sense of voice and it felt like this poem could only have been written by this poet.

Dogfight in the Sky (by A K S Shaw of Templecombe, Somerset)

I really loved the way the writer took the theme of flight in an unusual direction, using the idea of a fighter pilot remembering his WW2 dogfights as a way to examine his present-day battle with cancer. The extended metaphor works seamlessly, and the way the writing slips between the two types of war really helps us to understand the way the character thinks as well as the nature of the journey ahead of him. It’s a really well-crafted piece of writing, the extended metaphor done to perfection. The vivid comparison with a great sense of empathy, struck me and stayed with me.

And finally, what grabbed the glory of First?

This was a poem that took a very small moment – that of a ladybird landing on the poet’s hand – and brought it to life in glorious technicolour. The comparison to a helicopter, which the writer examines in great details before dismissing at the end of the poem, is fantastically well-realised, and there are some wonderful turns of phrase in the piece, including the ‘toadstool / embarrassing a back garden’ and the ‘orange fuselage / that aeons ago / patented polka-dots’. It’s an incredibly vivid and descriptive piece that I really enjoyed reading. It was the incredible flair and revelry for the language that enamoured me to this poem.

Thanks! We’re really grateful for the time and care you took in your judging.

Thanks again for allowing me to be part of the process – I really enjoyed it! I was so impressed by the quality across the board; normally out of 80-90 poems, there are usually 20-30 that are easily discardable, but not here – you’ve attracted a really good level of poetry entries!

I hope the entrants who weren’t placed take heart and continue to write – and perform – their poetry. I certainly will, because even though you didn’t select my poem, I will still come down to Crosswords at the Malt Cross and read it out.

Which one was it?

“Not Green At All”

Thanks, Leanne. Anyway, we look forward to seeing you soon & hopefully getting you up to visit Newark!

We’ll try and post the winning poems on our website within the next week or so. You can find out more about Leanne at her website:  www.leannemoden.com/